Table 1. Highlight assay results from drill hole WPC22-22. All Company Waterpump Creek results can be found on the website along with more technical details.

* Width reported as core length
** Previously visual release of 9/22/2022 reported 3.9 meters for middle zone and 40.7 meters for the lower zone

“The overall grades in this hole are outstanding with some exceptional intervals with silver grades up to 39 oz/ton in one of the internal zones,” said Kit Marrs, WAM CEO.  “These three high-grade intercepts total over 86 meters in composite thickness and tie together with similar mineralization in ten other holes to give us 400 meters of continuous high-grade mineralization linked to the sulfide chimney cut in WPC22-18. All the signs indicate this is part of a major CRD system and we can’t wait to start the 2023 drill season and continue tracing this mineralization south where we think these zones coalesce and become thicker.”

The discussion below incorporates visual data from drillholes WPC22-21 and -22 and from previous drill holes (See news release of September 22, 2022).  Assay results from WPC22-21 will be reported when received and vetted.

Hole WPC22-22 cut three significant zones of massive to semi-massive sphalerite and argentiferous galena in a matrix of secondary dolomite like that seen in previous drilling press releases. The intercepts are separated by highly altered and weakly to unmineralized dolomitic host rock. All the intercepts clearly show multiple cross-cutting stages of mineralization. Distinctive zones of silver-rich galena cut separate lower-silver sphalerite stages. There are at least two separate stages of sphalerite.

Data from this release continue to show a strong correlation between silver and lead with each 1% lead associated with approximately 1 oz/ton silver. Zinc grades appear far more variable and reflect different stages of mineralization.

Combining the results from the first 23 holes drilled in the Waterpump Creek structural zone allows recognition of a continuous elongate ribbon (“manto”) of massive sulfides 30 to 75 meters wide and 400 meters in length plunging gently to the south (Figures 1 and 2). Mineralization remains open in several directions. The mineralization affects reactive dolomite lying beneath an impermeable schist along the WPC Creek structure. Hole WPC22-18 tested the intersection of the WPC and Illinois Creek structures and cut 103 meters of massive and semi-massive sulfides interpreted to reflect a “feeder chimney” and a possible mineralizing fluid upwelling zone.  The three emerging mantos of high-grade silver-lead-zinc mineralization in WPC22-22 extend the lower mineralized zone 75 meters south of WPC22-18 and suggest it continues to thicken in that direction.  This could indicate another source or mineralizing fluid upwelling zone down dip to the south. 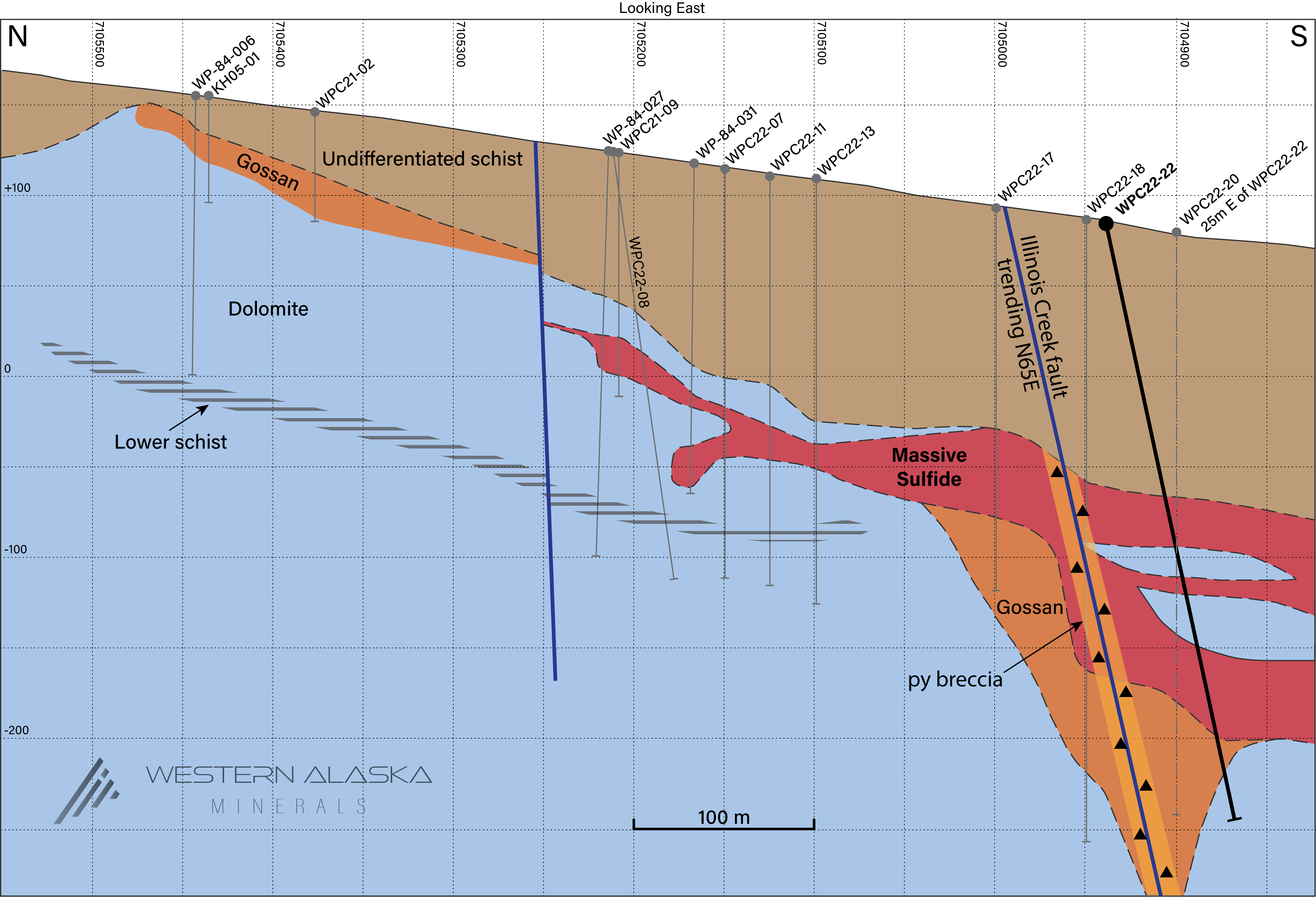 Figure 1. Updated longitudinal-section down the axis of the Waterpump Creek manto showing its position beneath the overlying schist and progressive thinning to the north from the WPC22-18 Chimney. Note how the manto maintains very significant thickness to the south into WPC22-22 and how the highest-grade upper part of the manto can be traced continuously for 400 meters. Note also the pyrite zone concentrated along the interpreted Illinois Creek Fault and how late movements along the fault have allowed surface waters to infiltrate and oxidize the pyrite and surrounding sulfides to a massive gossan. 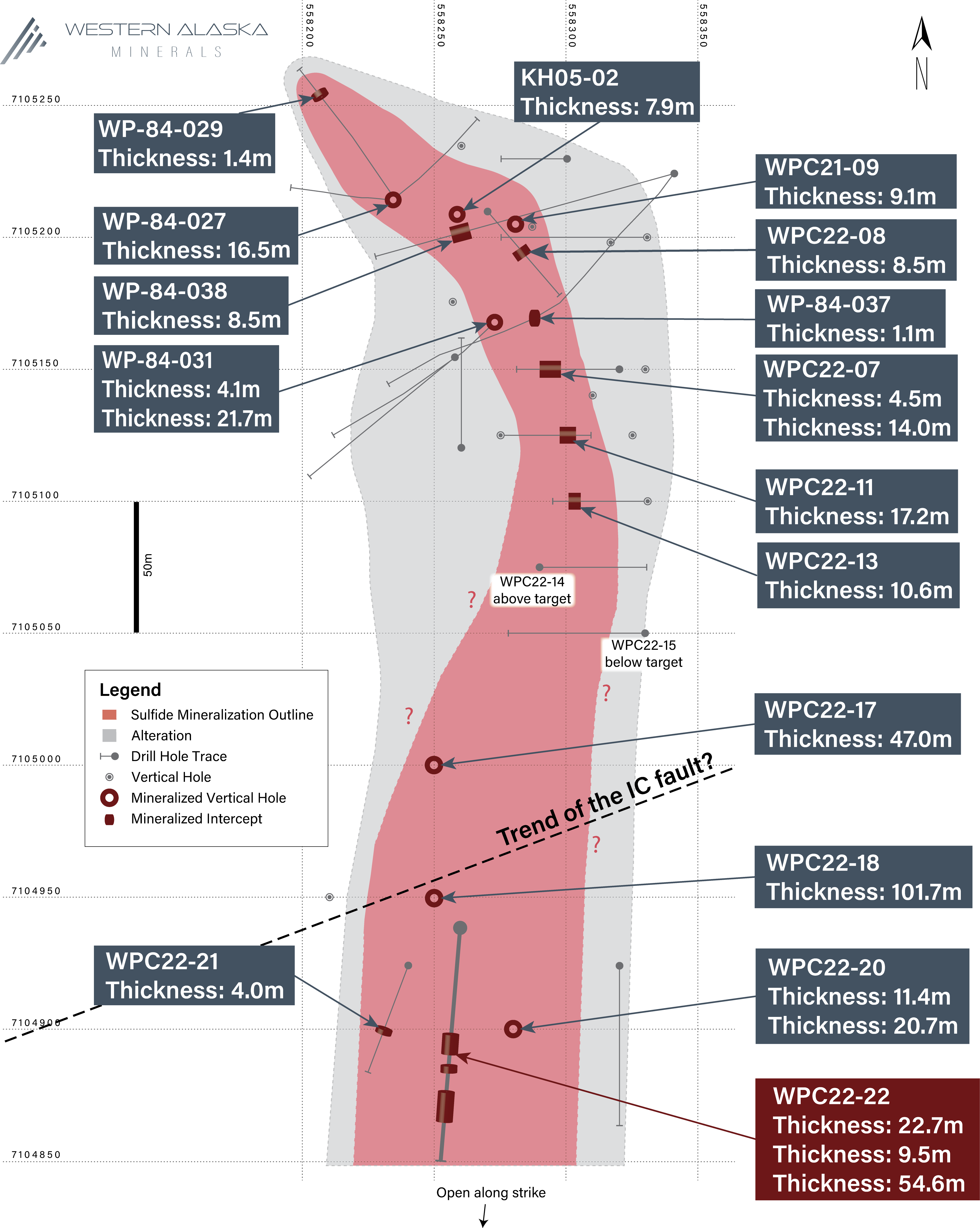 Figure 2. Pierce point plan map of drilling at Waterpump Creek showing the emerging shape of the Waterpump Creek Manto and the location of the WPC22-18 Chimney at the interpreted intersection of the WPC Graben and the projected trend of the Illinois Creek fault. Note the continuation of strong manto mineralization to the south into WPC22-20 and 22 and that the manto remains open to the south along this principal axis as well as laterally.

Planning for 2023 is ongoing as this year’s results are analyzed in detail. The current plan is to drill 15,000 to 25,000 meters next season with three to five company-owned drill rigs. 2023 drilling will focus on following the Waterpump Creek high-grade manto to extend the manto along strike with drill spacings ultimately suitable for resource modeling.  Concurrently, we will explore via drilling and geophysics the multiple similar geologic settings which have been identified elsewhere on the property.

Greg Anderson, Executive Vice President of WAM and a founding director of its predecessor company, Western Alaska Copper & Gold Co. (“WAC&G”), has announced his intention to retire from an active management role with the Company effective December 31, 2022.  He will continue as a Company Director and an advisor to the Company in areas of corporate strategy and finance.

“Greg has been actively involved since the inception of WAC&G in 2010 and was particularly valuable in the going public efforts which resulted in the successful listing of WAM on the TSX Venture Exchange in November 2021.  I want to thank Greg for all he’s contributed to WAC&G and WAM”, said Kit Marrs, CEO, “and I am pleased that Greg will continue to play an important role with the Company as an advisor and member of the Board of Directors.”

To better understand more details and the implications of WAM’s ongoing CRD exploration at Waterpump Creek and the greater Illinois Creek District, more technical details on the project and a brief discussion on CRD geometries, zoning, and scale is available on our website.

Stuart Morris, P. Geo., is the qualified person as defined under National Instrument 43-101 that reviewed and approved the technical disclosures in this release. Mr. Morris is an independent consultant, Registered Geologist with the British Columbia Association of Professional Engineers and Geoscientists (BC-APEG) No. 135066 and with the Arizona State Board of Technical Registration No. 16289.  Mr. Morris has a MS in Economic Geology and 40 plus years of experience in mineral resources, mine, and exploration.

His review verified the data disclosed, including geology, sampling, analytical and QA/QC data underlying the technical information in this news release, including reviewing the reports of ALS, methodologies, results, and all procedures undertaken for quality assurance and quality control in a manner consistent with industry practice.

Core logging and sampling is completed at the Illinois Creek mine camp in Alaska. Drill core is logged under an established procedure using Geospark commercial logging software. Core interval selected for assay are sawn lengthwise in half.  One half of the core interval is bagged and labeled for assay.  The remainder is stored on site for reference.  The bagged core samples are transported to ALS facilities in Fairbanks, Alaska from Illinois Creek under a strict chain of custody security protocol.  At ALS each half-core sample is crushed and pulverized to pulps.  The pulps are then split to the appropriate measured weights for the designated analytical analysis.  The pulps are then sent to the ALS laboratory in Vancouver, Canada, for analysis. The gold content is determined by fire assay of a 30-gram charge with an AA finish.  Silver, lead, copper, and zinc along with other elements are analyzed by ICP utilizing a four-acid digestion.  Over-limit samples for silver, lead, copper, and zinc are determined by ore-grade titration analyses.  ALS Inc. is independent of Western Alaska Minerals and its affiliates.

ALS Laboratory’s also performs its own internal QA/QC procedures to assure the accuracy and integrity of results.  Parameters for ALS’ internal and WAM’ external blind quality control samples are acceptable for the elements analyzed.  WAM is unaware of any drilling, sampling, recovery, or other factors that could materially affect the accuracy or reliability of the data referred to herein.

WAM is an Alaska and Arizona based company, listed on the TSX-V and focused on discovery of high-grade, district-scale ore systems in the historic Illinois Creek Mining District located in western Alaska.  WAM’s 100% owned claims cover 73,120 acres (114.25 square miles or 29,591 hectares), roughly 45 km from the Yukon River.  The District encompasses at least five evolving targets containing gold, silver, copper, lead, and zinc and was originally discovered by Anaconda Minerals Co. in the early 1980's. Since 2010, WAM, along with precursor WAC&G, has reassembled the Anaconda property package and been engaged in exploring the District.

On behalf of WAM